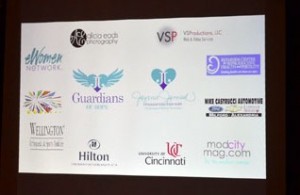 Last week ended on a high note for VSP. I spent much of the week creating a video for the Jaymie Jamison Foundation for Hope for their gala on Saturday night. I encourage you to read about this foundation on their website. If you can support their cause, so much the better.

The video played at their fundraising gala Whispers of Hope before several hundred people. A majority of videos I do are for websites, so they mostly play on computer monitors. I always get a rush when one of my videos plays on a 10′ screen. But I don’t think I’ve played to such a large crowd before and in downtown Cincinnati (which is slightly bigger than Loveland).

This video was also different from what what I typically do in that I didn’t have any original footage or photos that I created myself. It was all material provided to me by the client. The gala director for the Foundation gave me a bunch of photos and a couple video clips, two of which were cell phone videos shot in the wrong perspective (vertically instead of horizontally); fortunately, they were of a fairly decent quality. However, when editing items that I don’t produce but are given to me, there is no control over typical digital standards. I then have to fit these pieces together and create a story. This can be somewhat of a challenge. But that’s where I believe true creativity comes in: taking non-standard materials and drawing a coherent story out of them. And making it look good.

Unfortunately, I cannot post the video because of privacy issues, but the director liked it, and it made people cry, which was my goal; so I’m happy! But here is a clip of one of the creative scenes I crafted. This is also the clip of cell phone video shot vertically. I think I came up with a good solution. I’ve also seen this “talking to text” effect a lot and had been wanting to try it. It wasn’t really as difficult as I thought it would be, and I think accentuates what she’s saying very well.

On a personal note, the evening was absolutely amazing. The venue was gorgeous; the food was delicious, and there was an open bar! (just kidding – I don’t drink much, but I had to try the featured drink of the event: it was teal! Who can pass that up?) Several of my girlfriends also attended the gala and we partied all night! Here are some pictures from the evening. I’m learning how to take better pictures in low light situations, so these didn’t turn out quite as super-duper as I’d hoped, but I am seeing improvement over other pics I’ve shot; plus, I’m getting a handle on the camera controls. Photography class was a lo-o-oo-o-ng time ago!

So, do you have some video footage you’ve shot that’s just sitting on your computer (or worse, on your camera!)? You know, it’s not doing you any good there. Get it out. Send it to me. Let me make it into a beautiful video for you. No matter what part of the country you’re in, we can work together. Technology is a wonderful thing!